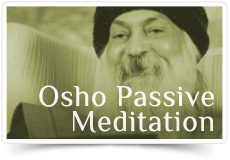 Its a Beautiful technique given by osho to cleanse, it comprise four stages and the last stage comeback follows the coming back of Buddha within you.

“Remember, the first step of the meditation is Gibberish. Gibberish simply means throwing out your craziness, which is already there in the mind, piled up for centuries. As you throw it out you will find yourself becoming light, becoming more alive, just within two minutes.

Any child can do Gibberish, it doesn´t need any training. From the very first moment you are almost trained. Gibberish needs no training, nor does laughter need any training. If you can do Gibberish you are cleansing your mind of all kinds of dust that goes on gathering. And as the mind becomes silent…there is nowhere to go other than inwards. All roads are forgotten; there remains a single one-way traffic.

Just for a day or two you may hesitate to go that much inside. Who knows whether you will be able to come back or not? It is a playful, joyful exercise. There is nothing to be worried about, you can go as deep as you want… not knowing Chinese but speaking Chinese, not knowing what they are saying but saying it very emphatically, not bothering at all who is listening…. Nobody is listening, so you can say anything you want, you are not going to offend anybody. There is nobody other than you.

That will make you saner than you have ever been, because you throw so much garbage that you were holding. Do you think your gibberish is coming from the sky? You are carrying all that garbage, throw it! Just do it totally, enthusiastically. Don´t be bothered whether it is Arabic or Hebrew or Chinese; you are allowed to speak any language that you don´t know. Just avoid the language that you do know, because the language that you do know will not bring your nonsense out, it will be very grammatical. Meaning is not at all the requirement. Just for two minutes give an opportunity to your existence to be meaningless. And you will be immensely shocked to know that just within two minutes you become so light, so ready to enter into silence.”

For more information or experiencing a session.

Every Sunday we have FREE Online meditation session. Its open for all from 8-80age group with no caste or gender discrimination. For ZOOM link and upcoming details visit site or Facebook page. Check out Upcoming Happenings Section for details.

Each day is a new opportunity. I chose to make this day a great one.

When no one was ready to believe that people are willing to change and ready for spiritual transformation in Ahmedabad, Anannd Utsav has not only pioneered change in this area, but under the dynamic leadership of Bharti Verma, new areas have been ventured and lives of many touched and transformed. Kudos to such a wonderful intiative and kindling light in the lives, hearts and souls of many many people.